Failed to win any of their last 11 competitive outings stretching back to their 2-0 success over Gibraltar in June 2019.

Failed to win any of their last 11 competitive outings stretching back to their 2-0 success over Gibraltar in June 2019.

Time to retire the Irish National Team.
Click to expand...

Time to put Mick back in charge

paddysr said:
Time to put Mick back in charge
Click to expand...

Have a read of ybig.

Type it into Google. They are basically echoing what I posted.

Jack Daniels said:
Have a read of ybig.

Type it into Google. They are basically echoing what I posted.
Click to expand...

I was joking about Mccarthy but I dont think Kenny is up to the job.

They need to stop picking players who aren't getting games in the Prem. God I wish Grealish hadn't opted to play for England!!

paddysr said:
They need to stop picking players who aren't getting games in the Prem.
Click to expand...

They're picking players that aren't getting games in the Championship!
S

paddysr said:
I was joking about Mccarthy but I dont think Kenny is up to the job.
Click to expand...

Looks like he is in a spot of bother -

Republic of Ireland boss Stephen Kenny was summonsed for emergency talks on Friday following Sportsmail’s revelation he showed his players a ‘propaganda’ video.

Kenny is hopeful of keeping his job despite a Football Association of Ireland investigation into the matter which saw the head coach show his squad a video with political connotations as a way of motivating them ahead of last week’s game against England, news we exclusively disclosed on Thursday.

The 49-year-old was called into for a urgent meeting with FAI bosses on Friday to establish the full details of what happened in the team meeting ahead of last Thursday’s 3-0 loss at Wembley.

It is understood FAI chiefs also want to speak to coaches Damien Duff and Keith Andrews.

Players took varying degrees of offence to the video, with one source describing it as ‘anti-English’ while another indicating it was more aligned with ‘pro-Irish’ sentiments.

Nevertheless, there is significant frustration from inside the FAI regarding the incident which is being viewed, at the very least, as an error of judgement inside the governing body.

The FAI are keen for Kenny to gauge what level of regret he has over the issue, particularly given it offended at least one person enough to alert FAI chiefs.

The three-minute video referenced the Easter Rising in 1916, where Irish republicans launched an armed rebellion later stopped by the British who executed 16 of the ringleaders in Dublin.

Kenny was facing calls from outside the FAI on Friday to be sacked.

Conservative MP Andrew Bridgen told MailOnline: 'By firing up old resentments, the video only fuels extremism and racism and has no place in football. We must kick it out.

‘Can you imagine would happen if the England coach showed the England team films of the Second World War and the Nazi death camps before a match with Germany? It would have been career ending’.

Sportsmail columnist Martin Keown told talkSport: ‘Why do you need that motivation? This is a professional game of football. 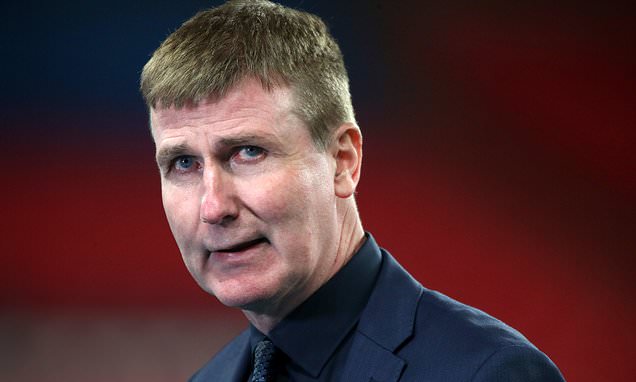 The video was shown by Kenny before the 3-0 defeat at Wembley last Thursday, with the Football Association of Ireland keep to speak to Damien Duff and Keith Andrews as part of its investigation.