Do we want the Lashers promoted?

We8PNE said:
Whereas yours is avoiding paying any form of income tax.
Click to expand...

We8PNE said:
Indeed. He works for someone who resides on the Isle of Man.
Click to expand...

Erm like the above board previous owners of your club who were squeaky clean, is that the best you can come up wit?
S

We8PNE said:
Indeed. He works for someone who resides on the Isle of Man.
Click to expand...

You'll forever be the club owned by a convicted rapist.
B

You'd have thought that We8PNE would have learned his lesson from his last futile attempt at drawing false equivalence between Ridsdales tax evasion and Owen Oystons ubernoncing conviction, but no, here he his, 2 days after their play off victory once again planting his giant tangerine flag right back on nonce hill for the entire forum to see. He's nothing if not persistent.
W

sf said:
You'll forever be the club owned by a convicted rapist.
Click to expand...

And you'll be the club who have achieved nothing since 1889.

We8PNE said:
And you'll be the club who have achieved nothing since 1889.
Click to expand...

You need to brush up on your history.

oh, and apart from your solitary FA cup win, could you remind me what tha Lashers have achieved?
W

LostinSpace said:
You need to brush up on your history.

oh, and apart from your solitary FA cup win, could you remind me what tha Lashers have achieved?
Click to expand...

Tier 1 you mean. Been there, done that. So that’s it!? You’ve been in the first tier.

You really are scraping the barrel if that’s all you have to be chuffed about. 😂

LostinSpace said:
Nobbers get banned from the Lasher forum for doing less than that.
Click to expand...

Please don’t ban the poor confused soul (boy/girl/Drag Queen). He/she is worth tolerating on here for the comedic value alone. I like to think on this forum we are a tolerant lot and on the whole treat people even Blackpool fans with respect (that they deserve) 😂

Do you mean the Premier League?

The same Premier League which meant your owners finally got their investment back and led to most of your "fans" abandoning your club when it needed them most.

Come back when you have won the double and had an invincible season.

We where a founding member of the football league who without wouldn't have even led to your existence.

Sadler has done a decent job and employed a very good coach. A coach who will likley be poached sooner rather than later.

The championship is a different beast since you last played in it and whilst you may have a promotion "boost" that squad of yours (much like ours presently) will find it tough.

Enjoy your promotion of course but you will soon all be crawing back into your hiding places you disappeared to a few years ago when we put you back in your place.

Verdad said:
It’s understandable to be so rattled lads with your bigger more illustrious and attractive next door neighbour coming to send you down.

We’ve got Simon Sadler 🎶 🤑 Hopefully you sell more than 50% of dumpdale this time we come to town 💩 either way we won’t be able to hear you lot 😂 🤫
Click to expand... 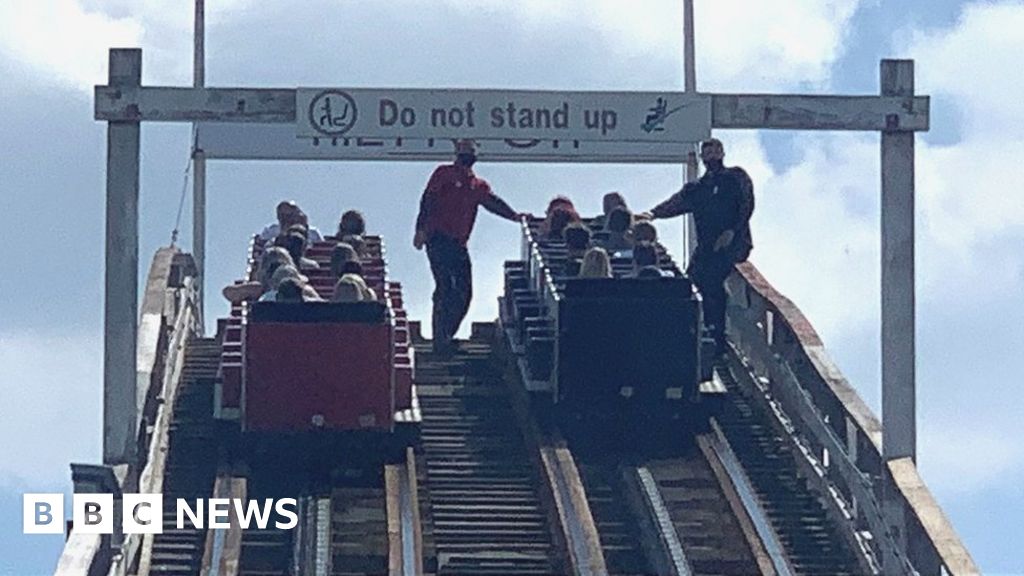 Riders are escorted back down the track after Blackpool Pleasure Beach's Grand National breaks down.

Just like your team, everything in shitpool always breaks down..........

I reported him after his 1st post in the Mod Forum as a "lasher in disguise".

We decided to let him play until he fully blew his cover with you lot.

Looks like the sun has got to a lot of them. They seem to think they’ll be achieving a top 10/top 6 finish this coming season. They believe most of their squad can make the step up - specially Maxwell...

There’s also some that believe Premiership football will be achieved within 5 years...You just couldn’t write it. As has been said, their squad is no where near as good as what we went up with when we beat Swindon. League 1 really is poor and they also don’t seem to acknowledge that they had to beat Oxford and Lincoln!

They are going to have a big wake up call. The Championship standard, whilst not being great - is still a big step up from league 1. Rotherham and Wycombe found that out and Blackpool aren’t any better than those two.
S

Blackpool have won an FA Cup, a 2nd tier title and a couple of those L1/2 trophies in their entire history.

As Shakespeare said, “A rose is still a rose by any other name” and Premiership football is just another name for the old League Division 1 football which we have been champions of, have your lot?
L

Dirty Harry said:
Yes. There's no point having local rivals if you can't ever play them.
Click to expand...

Absolutely I agree, why would you not want to compete against your local
rivals every season. I feel some fans on
here fear the competition
S

Lambo said:
Absolutely I agree, why would you not want to compete against your local
rivals every season. I feel some fans on
here fear the competition
Click to expand...

Them crying their eyes out under the Oystons was funnier than beating them.

I'd have happily seen them go bust and reformed in the 9th tier. More tears.

There's always the cup, which they've never beaten us in, ever, FA Cup or League Cup.
Last edited by a moderator: Jun 2, 2021
N

You couldn't hack it and came straight back down as failures just as happened on your previous season in the top flight 50 years ago.
Two failed seasons in the last 55 years is nothing to brag about.

Lambo said:
Absolutely I agree, why would you not want to compete against your local
rivals every season. I feel some fans on
here fear the competition
Click to expand...

I don't fear them, but just as they admit they don't wish any kind of success on us, a vast majority of PNE supporters feel the same way for them, heap pain and misery on them for an eternity.
D

No Danger said:
You couldn't hack it and came straight back down as failures just as happened on your previous season in the top flight 50 years ago.
Two failed seasons in the last 55 years is nothing to brag about.
Click to expand...

Hate to admit it, to think a shit club like them still managed two more than us tells you everything you need to know about the running of pne !!
Consistent mediocrity season after season !!!!!
If you took the club management out of it and purely relied on luck we would have achieved more.
Actually we had a bright spell when Bryan Gray was running the club !!!!
Oh yes and Just missed out !
Share:
Facebook Twitter Reddit Pinterest Tumblr WhatsApp Email Share Link
Top