Putting it in perspective

Patron
Rome wasn’t built in a day guys and gals.

I’m fairly sure it took longer than a month too.

Loans have dominated this window throughout all four divisions, not just in our backyard.

We’ve established who wants to be at the club, got rid of those who didn’t and provided an opportunity for others to prove they’re fit, or good, enough to take us forward.

It was an important and transformative window, representing the groundwork that needed to be done before the major renovations can be performed.

There’s obviously much to do behind the scenes between now and the summer whilst, on the pitch, we certainly need to play more football.

However, in agreeing to pay something resembling a market wage to Browne and DJ, as well the Whiteman deal, there are positive signs, all of a sudden, that Trev is prepared to do the necessary.

January was always going to be about the churn. It’s a shame some of you seem to have so much sour milk.

Patron
Correct me if I'm wrong, but aren't there new caps on wages coming in next season and we were already miles over our threshold for that?

Is this the reason for all the loans and just the one permanent signing?

pbc373 said:
Despite a lot of people complaining about the loans, I don't think it's all bad.

Iverson: We have brought in a top class keeper, no chance of signing him, but we could have signed a Ripley type on a permanent. I know which I'd prefer. Chance of another 12 months but if we don't, we have Rudd to fall back on. Great business.

Cunningham : Absolutely the right thing to do, blighted by injuries recently, it would have been a huge gamble to sign him permanently without out a full assessment. He's ours on a free in summer if we want him. Quality player when fit, potentially great business.

Lindsay : The lad has potential, without question be he has stagnated for 12 months. Obviously at present not as good as Davies but it would have been impossible to find a player of Davies quality within our budget. Clearly not in the manager at Stoke's plans so I'd hope we have agreed a reasonable fee to sign him in summer if all works well. Better option in the long term than a Harwood-Bellis who we'd have no hope of signing permanently.

Van Den Berg: Liverpool & Bayern fought over his signature, these clubs get very few signings wrong. Down the pecking order at Anfield, already agreed a season long loan for next season, so we have potentially one of Europe's hottest young talents on a free 18 month contract. What's not to like. Potentially great business

Molumby: Think this lad is going to be a great player at Championship level. Similar to Potts but I'd suggest an upgrade. The signing by Brighton of Caicedo puts him further down the pecking order. Great chance I believe of making this a permanent.

Gordon: Raved about by Everton fans, already has Premiership experience. I really don't think we could have made a better loan signing on the wing. Doesn't appear to be in Ancellotti's plans, maybe another 12 months next year.

Evans: I just don't get this one, especially as AN has picked Maguire, Riise, Barky and Sinclair ahead of him already up front. Cheap option but obviously like Stockley just a back up player who may be used in a horses for courses game or perhaps with Gordon on the wing, he may now feature regularly. I'd be surprised to see him here next season.

Disappointed we didn't bring in a right back but AN obviously has faith in Browne.

If anyone seriously thinks that we had any chance of replacing Pearson and Davies with better players on our budget despite what PR said, they need to give their heads a shake. DJ and Browne, excuse the pun "are like new signings" because we all thought they were gone. So you could argue we made 3 permanent signings.

I think we have the makings of a great midfield this season, the brand of football to date was never going to gain us promotion but we have done enough to stabilise and hopefully kick on next year.
Click to expand...

Could not have put it better myself. Great post

Deepdaledan said:
Would’ve much rather have done this than what we’ve done. Get one cb on permanent and a quality cb on loan.

instead we’ve got an average cb on loan and a young kid not highly rated by his club.

blackburn outshone us this window 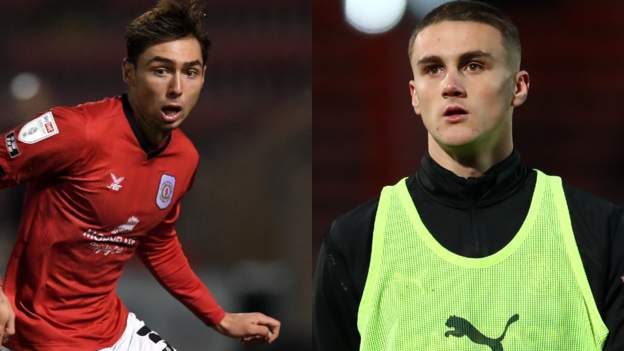 But they have loaned Pickering back to Crewe. I might be missing something here, but how would that have helped us now?

Bobbage said:
Correct me if I'm wrong, but aren't there new caps on wages coming in next season and we were already miles over our threshold for that?

Is this the reason for all the loans and just the one permanent signing?
Click to expand...

The Championship clubs decided not to bring in a salary cap.

We hope the new boy mixes well with his new team mates:

northendlondon said:
The big game changer for me, is that we appear to be able to compete with other clubs for wages on signings we haven’t done previously. There was never any scenario where we managed to hold onto Ben Davies going to Liverpool, or probably person. To be able to sign two of the big four And compete in the transfer market for the other signings we have, suggests to me that Trevor might view next season as the opportunity to get promoted to the Premier League with lower investment than normal
Click to expand...

if we can get promoted for the price of a bag of chips and a can of Fanta, I’ll take my hat off to them 👍
L

Patron
I didn’t think the window turned out too badly in the end. Davies going clearly wasn’t expected with the expectation that we would have all summer to find a replacement. Lindsay was well regarded when at Barnsley, a club much nearer to our own ethos that that basket case club Stoke City. He has 100 more professional appearances than Jordan Storey and maybe with Hunts as his partner is still young enough to progress in a settled team. VDB is an unknown quantity but will probably get game time in the team once things settle down. Greg will add a greater offensive threat but the key signing is Gordon. We simply don’t have the personnel much as Potts and Barky to break down a massed defence when playing at home and with Sinclair more central and AG out wider, I am hoping this gives us the cutting edge missing since McGeady left us. Add in Riis who has to be made the regular forward in the team and allow Molumby and Whiteman to become the fixtures in central midfield and we might see a change in mindset.

It may take time for the new people to gel but key to all this is of course our manager who has to move away from the turgid home tactics seen in the last twelve months and let players express themselves more. If Gordon is turned into another identikit Neil defender, I will truly despair.
Share:
Facebook Twitter Reddit Pinterest Tumblr WhatsApp Email Share Link
Top